Angacom 2017, ready for the most stringent innovation challenge 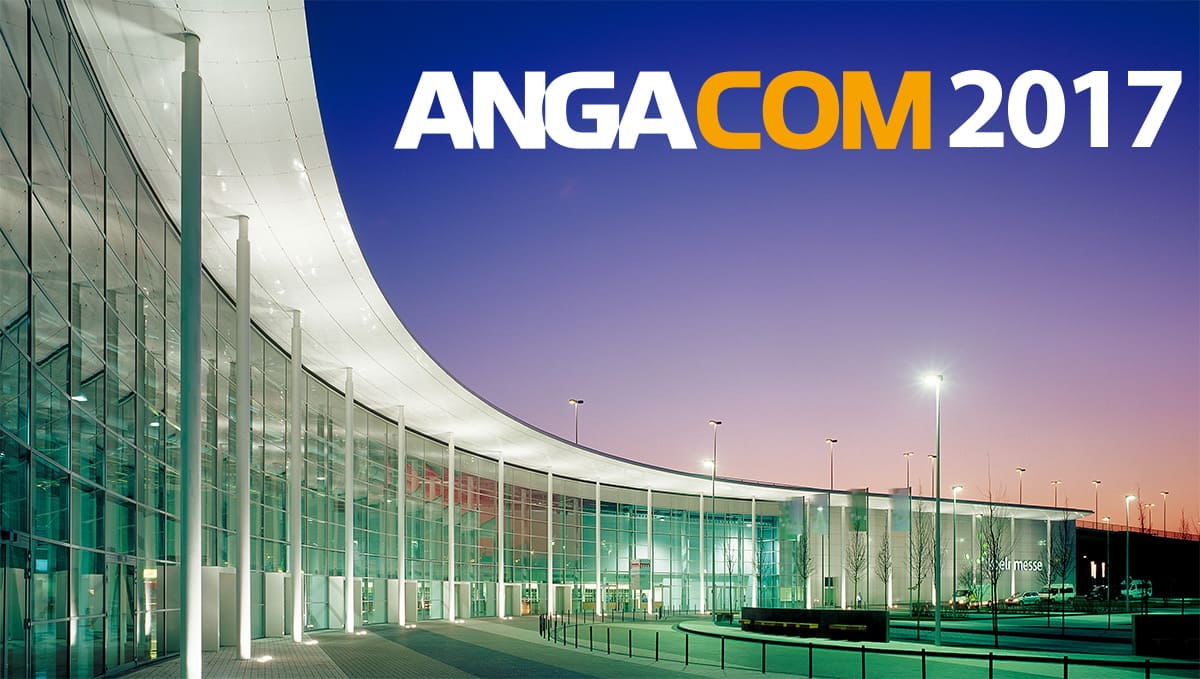 With 450 exhibitors from 37 countries and 18,000 visitors expected, ANGACOM holds a privileged position among the sector's European events. Gigabit networks, Internet of Things, customized television, and multi-screen solutions will be some of the hot topics of this year's edition that will take place between May 30th and June 1st in Cologne (Germany). As usual, companies will be eager to show their most innovative side before a professional audience, characterized for being highly demanding.

Televes will highlight its smart antenna series DAT BOSS, equipped with TForce technology, the result of the strong commitment the company with a self-developed technology that provided the DAT BOSS series with a dynamic range never seen before, 27% wider coverage and the best signal reception whatever the conditions. Even more important is the fact that TForce electronics prevents from any future scenario, whatever changes in the radio-frequency spectrum the new digital dividends bring. Together with the antennas, the new NevoSwitch and HEXA compact transmodulator series, will be presented, as will the latest field strength meters: the H30FLEX, highly praised in Germany for its robustness, flexibility and ease of use, and the innovative MOSAIQ6, with a unique interface allowing the configuration of up to six real-time measuring screens.

The TForce technology prevents and protects signal integrity, whatever the future brings in terms of the radio-frequency spectrum and the digital dividends.

In the communication infrastructures field, and focused on the Hospitality sector, we wish to highlight our commitment with the passive optical-fibre local networks enhanced with MyNET WiFi access points. This technology allows us to provide hotels and special buildings with advanced multimedia services, ubiquitous and permanent Internet connection, digital signage or energy efficient solutions

Televes in the world 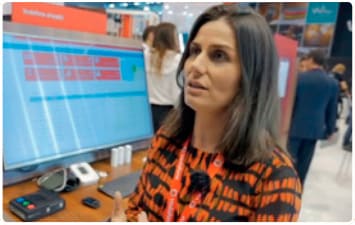 Moscow, Dubai, Barcelona or Cartagena de Indias (Colombia) are some of the places where Televes had a leading participation during the first quarter of the year. The company has worked intensively at the decision-making level of the different sectors in which it participates.

Thus, the social and health care development CareLife was presented at the Mobile World Congress in Barcelona, while the TRITON solution for port and coast service management was one of the main features at the Dubai Boat Show. At the CSTB in Moscow, the CABSAT (back in Dubai) and the Colombian Andina Link, the message was oriented towards the developments for the Hospitality sector, communication infrastructures and the classic catalogue for the radio and television signal reception and distribution, the classic side of an increasingly international and diverse company.

Televes in the media 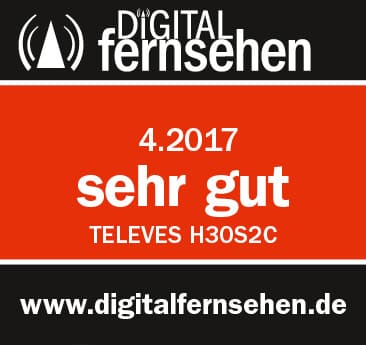 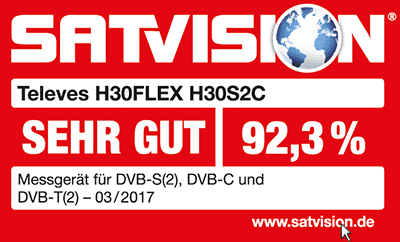 The new H30FLEX meter has been recognized as a very good product in two independent tests from both SATVISION, Digital Fernsehen and Sat Empfang.

The mentioned tests carried out a product in-depth analysis and highlighted the simplicity of use and the performance of this small and robust device.

In addition, the measurement assessment system (based on the traffic light principle) and the individual configuration capacity (based on the desired reception method) were both considered positive factors. 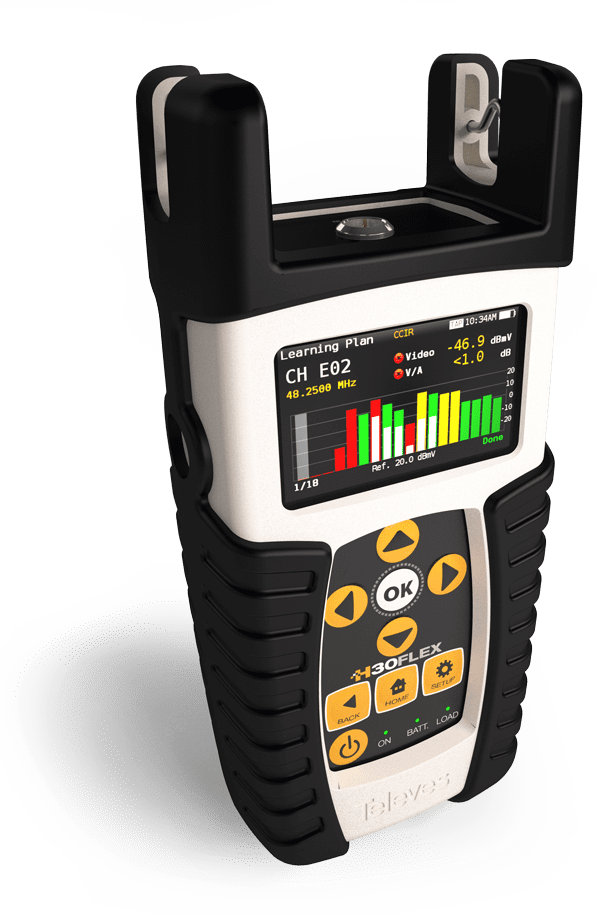 There are two ways of updating the firmware of an H30FLEX meter:

Option 1
By using the web application. To do this, you need to download the update file from the Televes website and save it into your computer (en.televes.com/h30flexdownload).
You must then select the update file by means of the application's Browse button. Finally, click on the Update button.

Option 2
By using the USB storage function from the Configuration menu.

...Televes replicates its solutions in a showroom at full scale?

In recent years, Televes has started the diversification of its business lines beyond television service distribution and towards the implementation of communication infrastructures based on ultra-fast broadband networks, capable of providing leisure and entertainment, communication, health and welfare services.

The showroom is built at full scale based on the scenarios where products are installed; they reproduce a hotel lobby, a full home with its living-room, kitchen, bathroom and bedroom, a hospital room, and ultimately any building or home scenario in which the current and future functionalities of Televes products can be tested.

An x-ray of the radio-frequency spectrum until 2030

Brussels guarantees the regulatory environment of the spectrum until 2030, allowing the appropriate space for the development of the different technologies present. 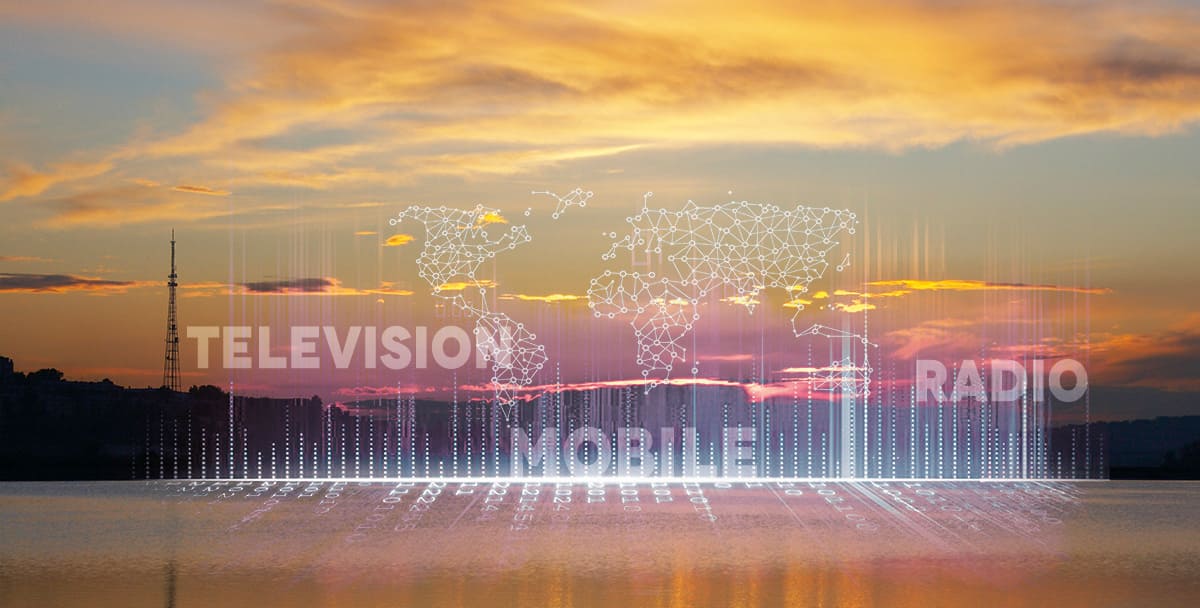 In a proposal published last January in Brussels, the European Commission took notice of the importance of securing the 694 MHz-to-790 MHz band for the provision of broadband services to ensure connectivity as part of its Digital Single Market (DSM), encouraging Member States to liberalize that band in a coordinated manner.

This same resolution describes the spectrum as a public asset and sets the 470MHz-to-694 MHz band exclusively for TDT broadcasting services in primary mode, and for PMSE (Program Making Specific Equipment) in secondary mode until 2030.

The resolution highlights the fact that both the TDT and the PMSE sectors require “regulatory predictability” based on the availability of enough spectrum for the development of services - specifically of FTA (Free To Air) television - while ensuring space for its own investments in order to meet the European audiovisual policy objectives in terms of social cohesion, pluralism and cultural diversity.

This resolution - agreed among the European Commission, the European Parliament and the European Council - is welcomed by the sector, since it will provide the television industry with legal protection and allow the investments required for the second Digital Dividend, as well as the development of a technology still to contribute a great deal to the audiovisual sector.

In this respect, projects such as WiB or recent EWS (Emergency Warning System) reveal that the broadcasting sector keeps evolving and that broadcasting will still be a key player in the connected world, due to its intrinsic advantage of one-to-many transmission in any location and under any circumstances.

Next issues of this newsletter will keep you posted on these projects.

Why am I not able to program an AVANT9 using my Android tablet?

One of the big new features included in AVANT9 is the configuration capacity by means of ASuite.

AVANT9 programming by means of an Android device - either tablet or mobile phone - requires an OTG cable (included in the multiband amplifier's package). The USB connection of an Android device does not function as a computer's; this is the reason why OTG is used to enable communication between a mobile device and an USB device (pen drive, keyboard, etc.).

Its use is not arbitrary and allows a single mode: micro-USB connection to Android and female USB connection to the AVANT9 (see figure). Some Android devices are not compatible with the OTG extension. Should this be the case (check terminal compatibility with OTG) it still can be programmed by means of the ASuite application for Windows. 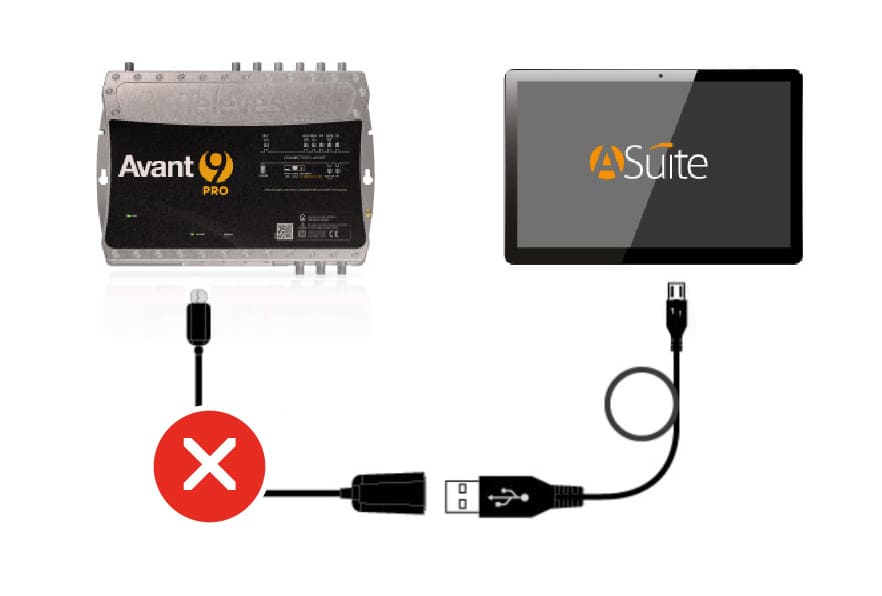 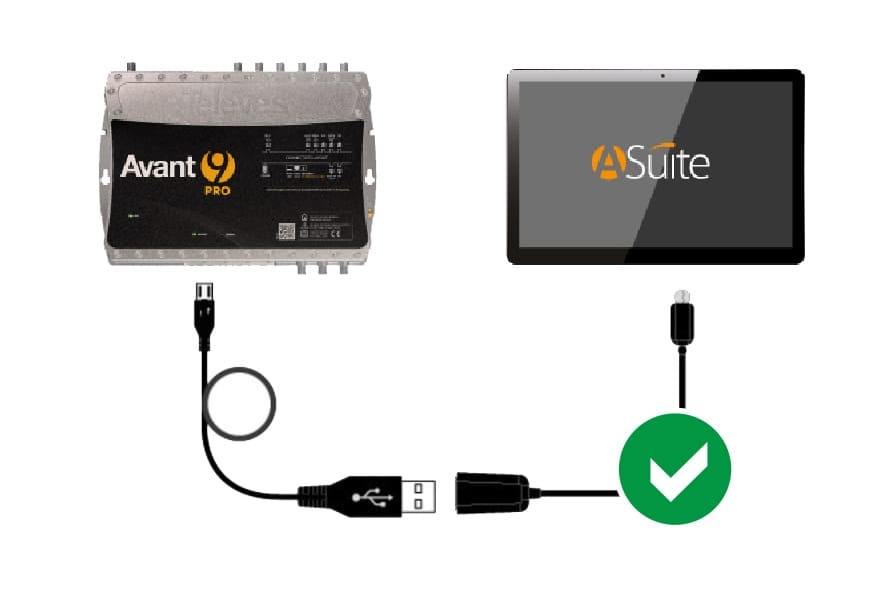 Television sets have a limited mode for interpreting the configuration of video and audio digital services. Televes encoders have a wide compatibility range

In an encoder, video is characterized by means of a combination of parameters, such as resolution, mode, and frame rate. Thus, 1080p60 is interpreted as a signal with 1080 horizontal lines, progressive mode, and 60 frames/second.

Resolution
Television sets still measure their screens in terms of horizontal and vertical lines. The combination of both numbers (1920x1080, for example) will give us the total number of pixels of the image: 1920Vlinx1080Hlin = 2,073,600 pixels.

Mode
It defines the way in which information is transmitted (pixels). When all the lines in the square (frame) are transmitted, we call it progressive (“p”) mode. When transmission is divided into odd and even line packets, we call it interleaving mode (“i”).

Frame Rate
The frame rate is the information flow measured as the number of squares per second. The square, or frame, can be divided into fields when the odd and the even lines are considered. The Frame Rate parameter is thus directly proportional to the perceived quality:

For all interleaving mode (“i”) cases, the squares are assumed to include either odd or even lines.

Besides the image quantification parameters, there is also the way in which the image is coded (codec). Televes encoders include two types of codecs: MPEG2 and H.264/MPEG-4 AVC.

Encoders currently have multiple configuration options, most notably the Video Codec and Max Output Resolution tabs. Besides the traditional Video Codec (MPEG2 and H264) options, new values are added in the coding profiles for H264 (Image 1).

For Max Output Resolution, changing the coded service resolution to adapt to the installation receivers is now allowed (Image 2).

When it comes to checking encoder configuration, having a strong signal and the capability to change resolution prove to be very useful. zAs HD is a signal generator capable of performing this function (Image 3).

The output resolution configured and provided by the encoder can be checked using a field strength meter (Image 4).

Selection of the video codec profile.

Selection of the output resolution. 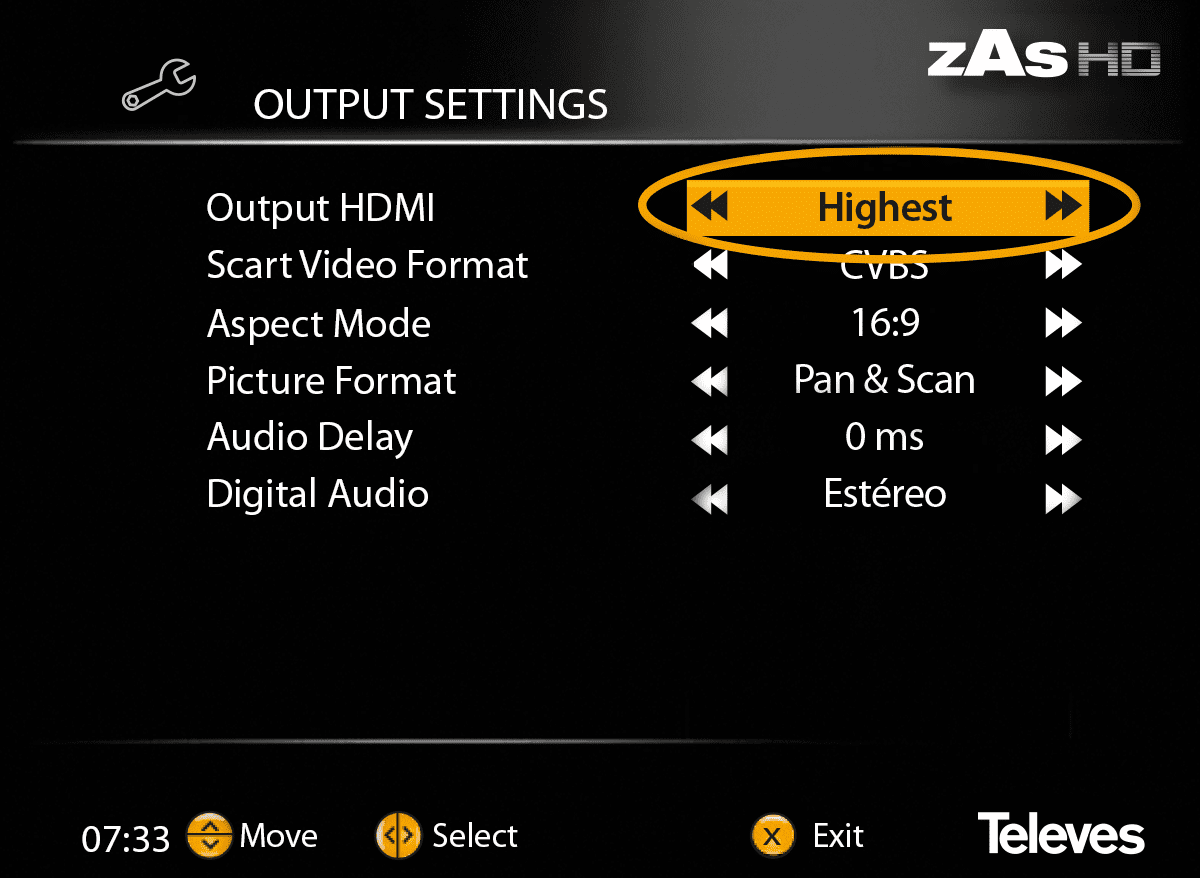 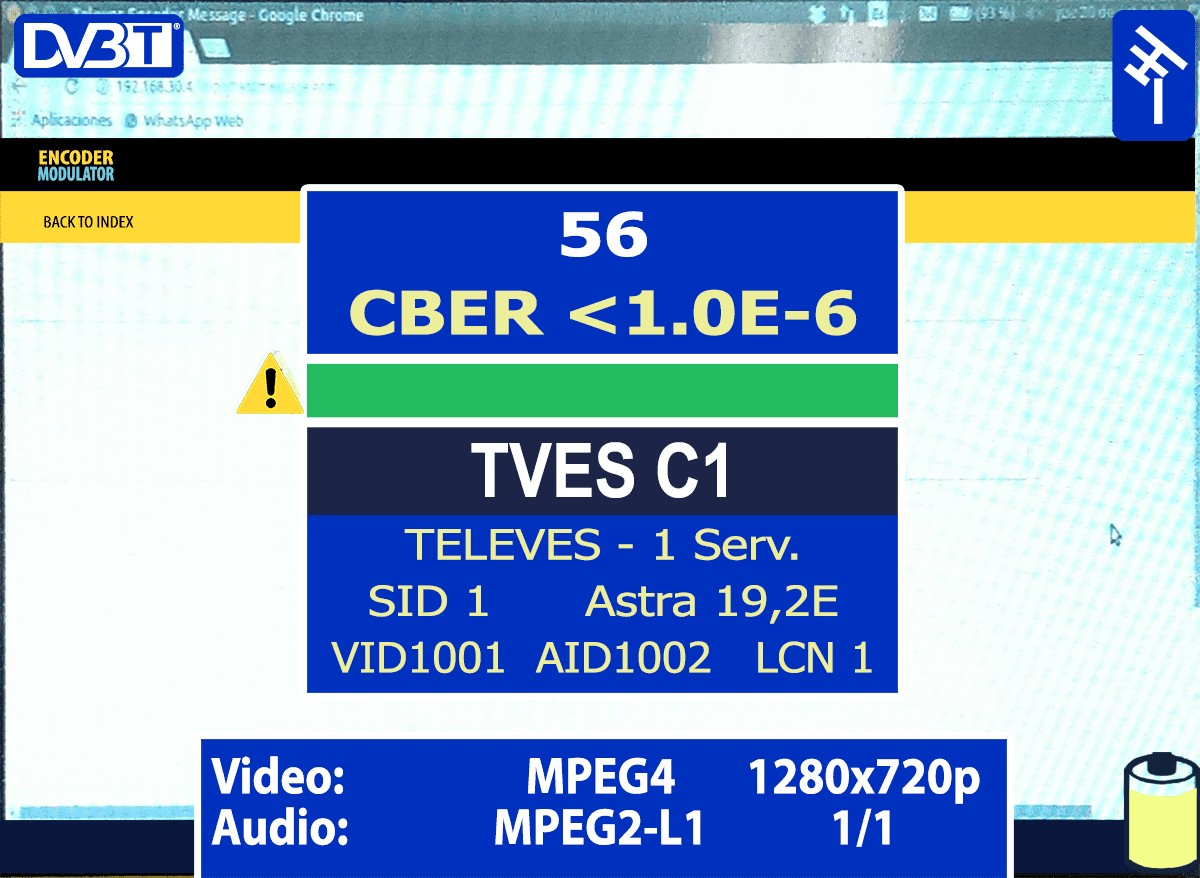 Reading of a service resolution in a H60 spectrum analyser.

Based on a set of default parameters, a channel scanning is performed for the unit to self-configure and adjust.

The scanning is carried out on all connected UHF and VHF inputs. All channel frequencies are covered with a tuner, which detects the DVB-T signals with the required quality and a minimum reception level of 60dBμV. The different channels found for each UHF input are subsequently assigned to the filters. The assignment prioritizes UHF, and the order followed goes from Filter 1 to 10. Each individual channel found is assigned a single filter; the consecutive channels are assigned to that same filter until a maximum of 7 channels is reached.

This function makes AVANT9 a Plug & Play device, because… the best programming is no programming. 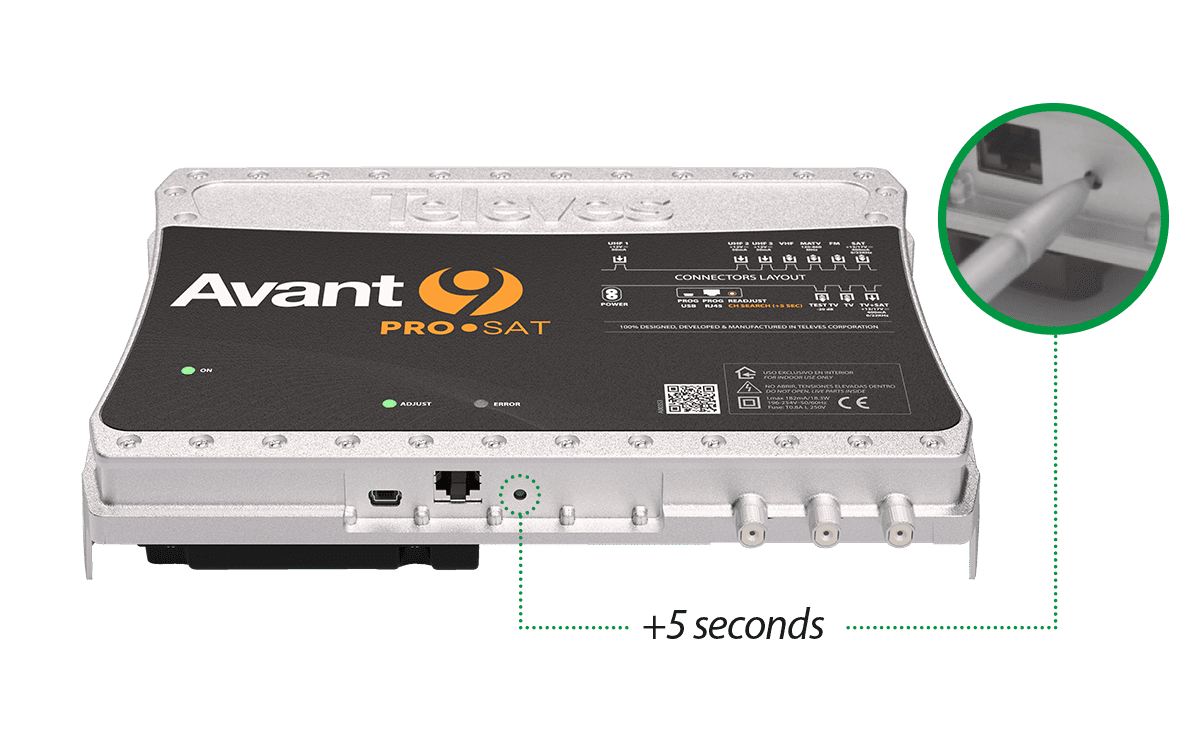 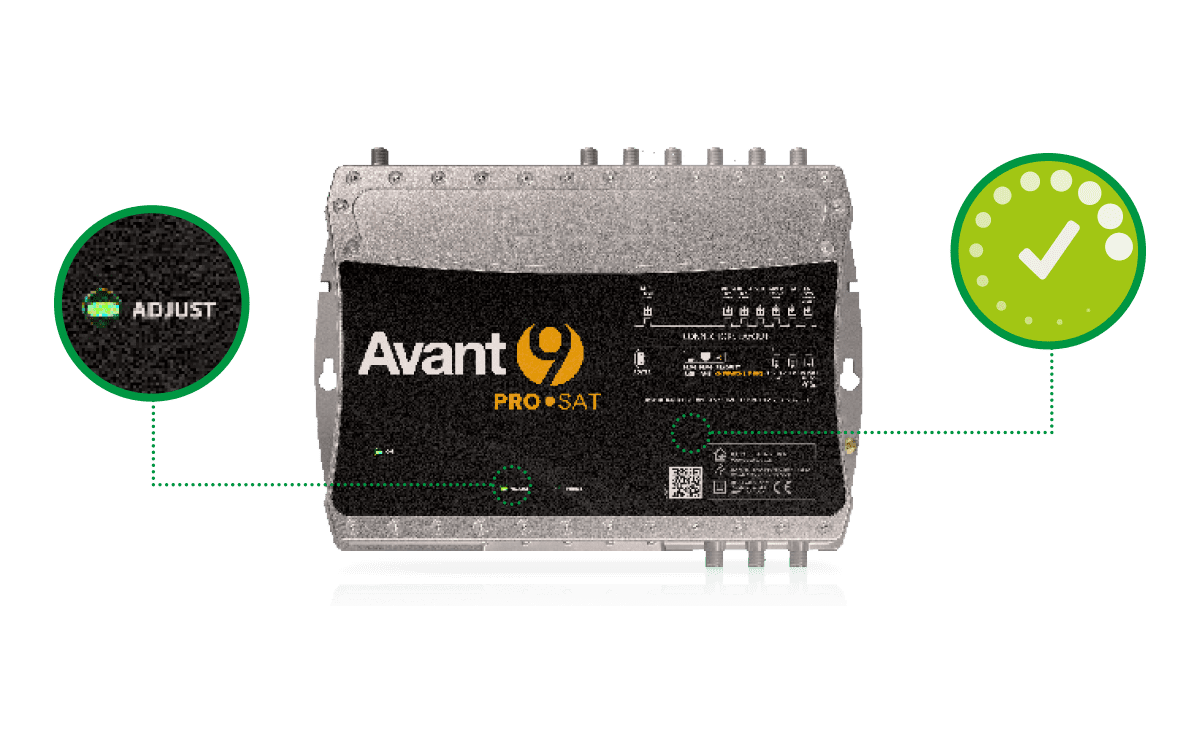 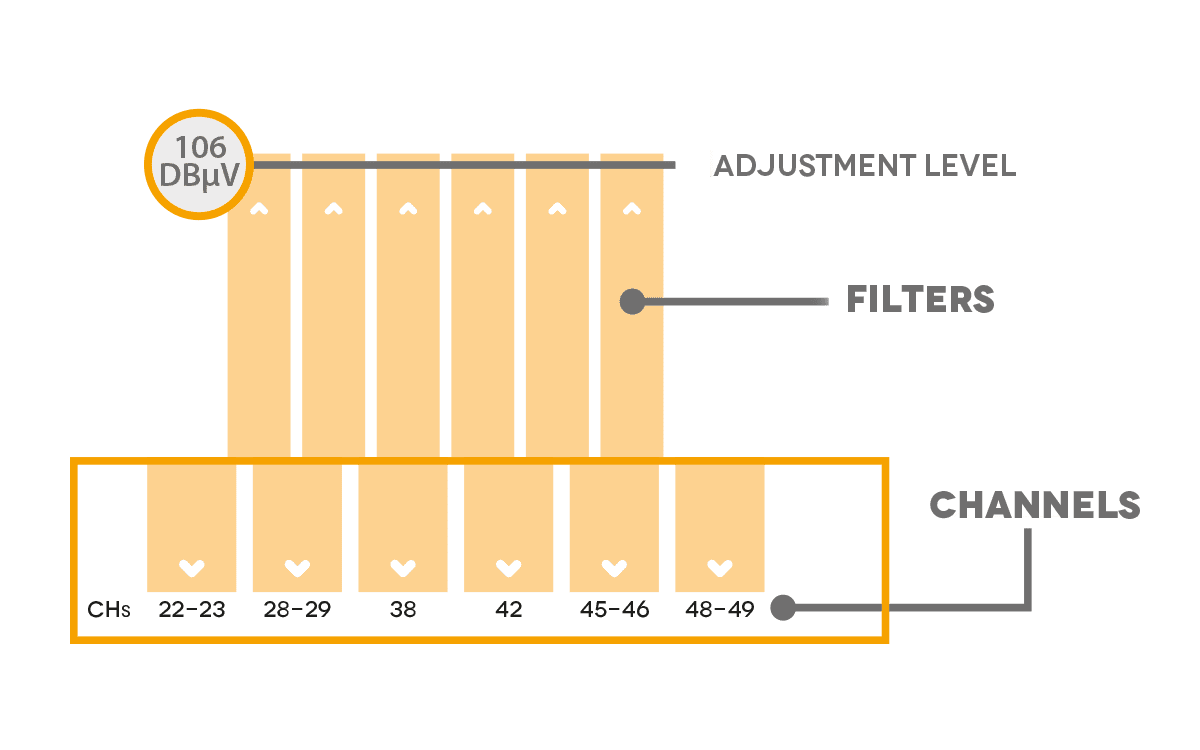 The Hard Rock Hotel is located in Costa Adeje, a town in the southern part of the island of Tenerife. It is a five-star hotel belonging to the Palladium Hotel Group, with close to 700 rooms and halls, capable of accommodating more than 500 people. The hotel is equipped with a FibreData installation from Televes with an FTTR (Fibre to the room) topology that brings together all the advantages of the GPON protocol.

Three OLT512 (ref. 769401) are installed in the headend, and the PON network has 740 ONT (ref. 769501). Seven data services are distributed through this equipment, which include Wi-Fi (both for clients and for the hotel's staff), IPTV, administration LAN, VoIP, etc.

Network design and administration, as well as the installation itself, were carried out with by Nethits, an integrator from Valencia. 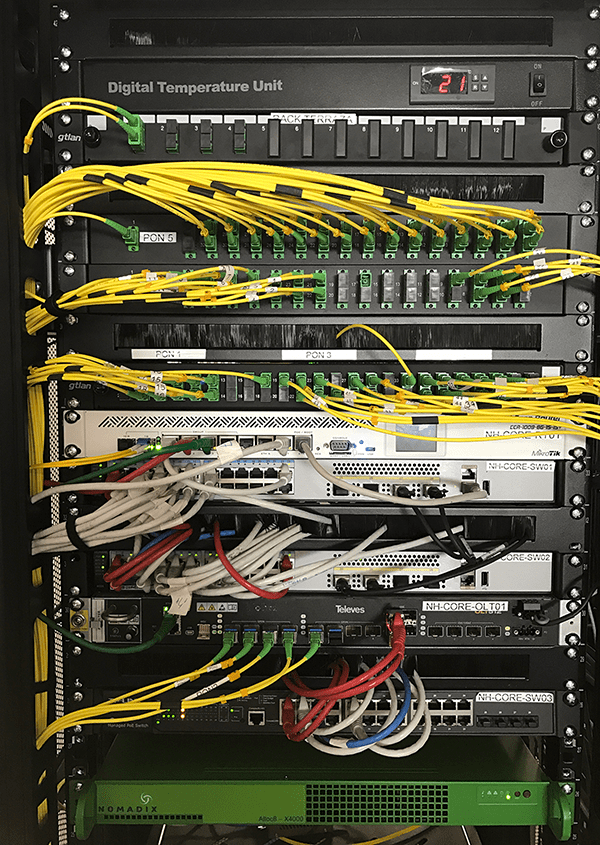 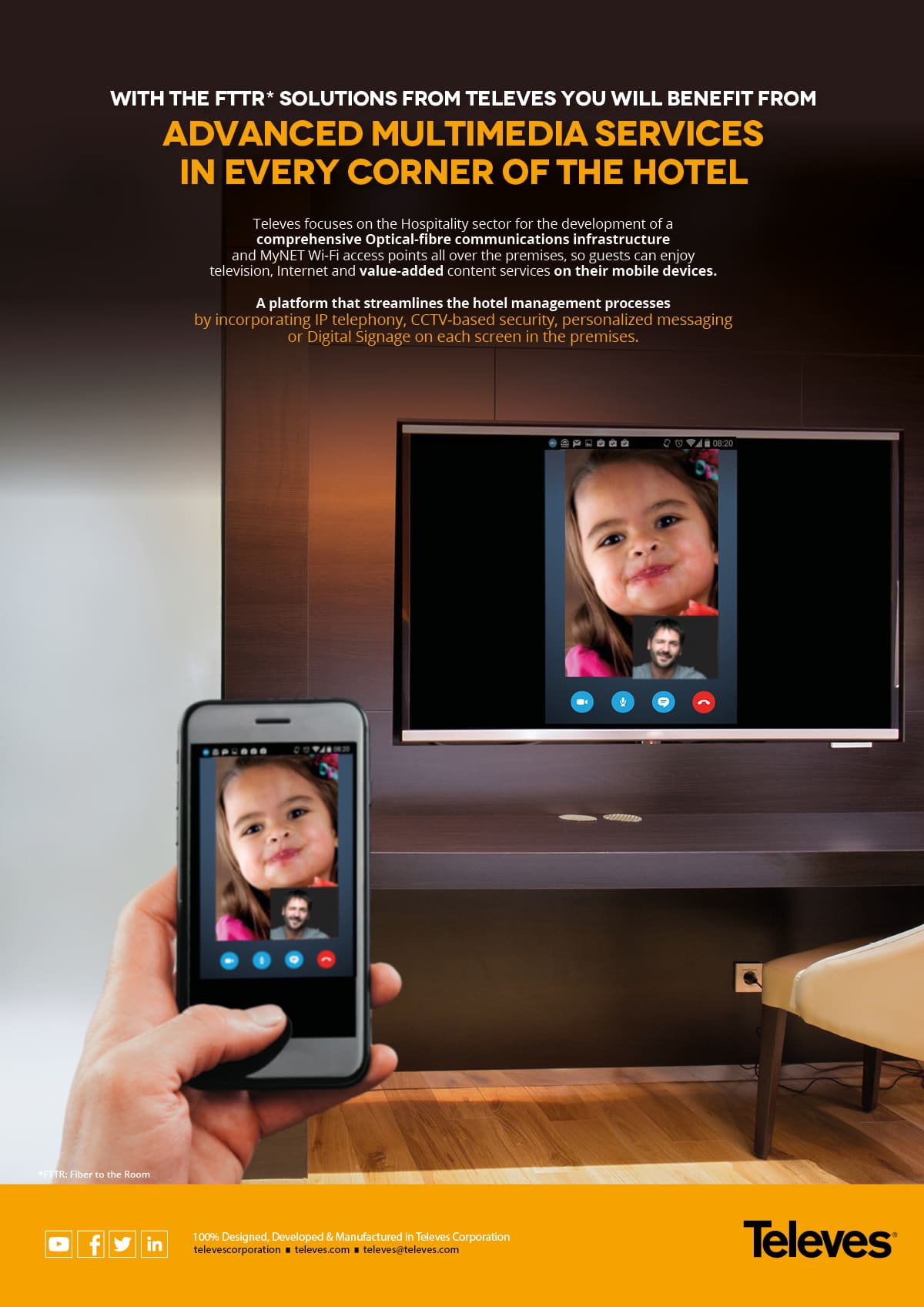