DTT is here to stay 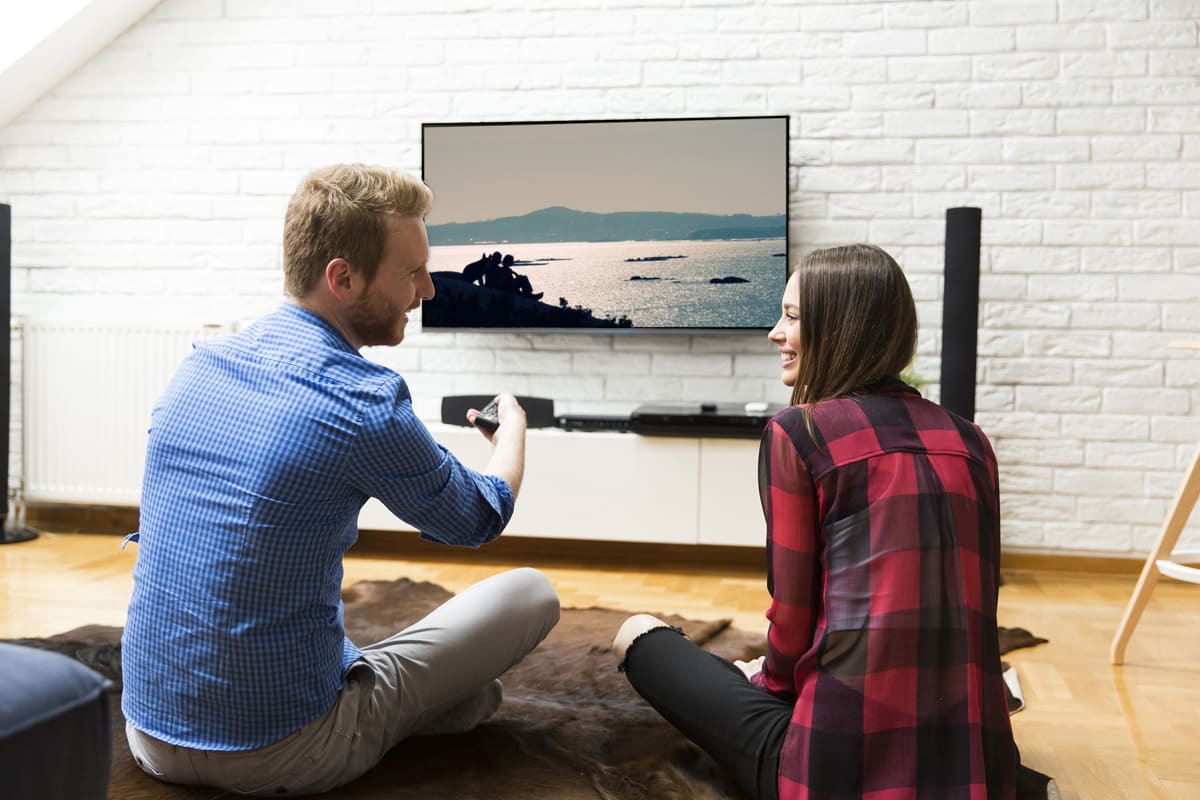 All the uncertainties that existed only a year ago regarding the future of Digital Terrestrial Television (DTT) have already been resolved. Following the success of the World Radiocommunication Conference 2015 (WRC-15), the Official Journal of the European Union recently published the decision of the European Parliament to exclusively assign the 700 MHz sub-band (470–694 MHz) to the DTT at least until 2030, which confirms that DTT is here to stay. This decision ensures the development of DTT in the medium term, including the liberalisation of the second digital dividend. 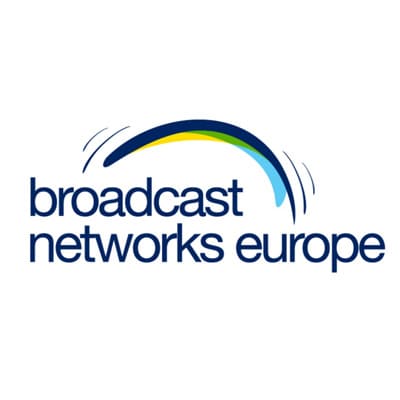 In a decade, DTT coverage has increased from 5% to 45% to become the leading platform for television distribution inside the EU

Last June, Broadcast Networks Europe -­the entity that ensures a suitable regulatory environment for broadcasted radio and television- published some data showing the good health and the extraordinary social and economic value of DTT.

First, it highlights the significant increase in DTT penetration for the last decade, which made DTT become the leader platform for television distribution, with an increase from 5% to 45% in the period 2005 to 2015. It serves 100 million homes in the European Union, and 250 million people (80% of the population) enjoy a total amount of 2,000 channels.

Broadcast Networks Europe highlights DTT as the “backbone” of the EU audio-visual model. Since this technology ensures universal and free access to information, culture and entertainment, it contributes to the preservation of such values as public service, pluralism and inclusion. Moreover, it does represent a significant contribution to growth and quality employment

Can new satellites be added to the H30FLEX channel plan?

The H30FLEX web-based configuration eases personalisation and use.

After connecting the meter to the PC and installing the appropriate driver, you need to access http://h30.flex in the address bar of your internet browser. This will open the configuration web application.

H30FLEX allows the editing of the channel plans (terrestrial and satellite), the creation of new plans or the duplication of an existing plan. It also allows you to add new satellites to the channel list. To do so, you need to follow the steps below:

This will allow you to save any satellite into the original factory-set list, which will facilitate the pointing process for new satellites

Besides the new web development, the following upgrades are worth highlighting: 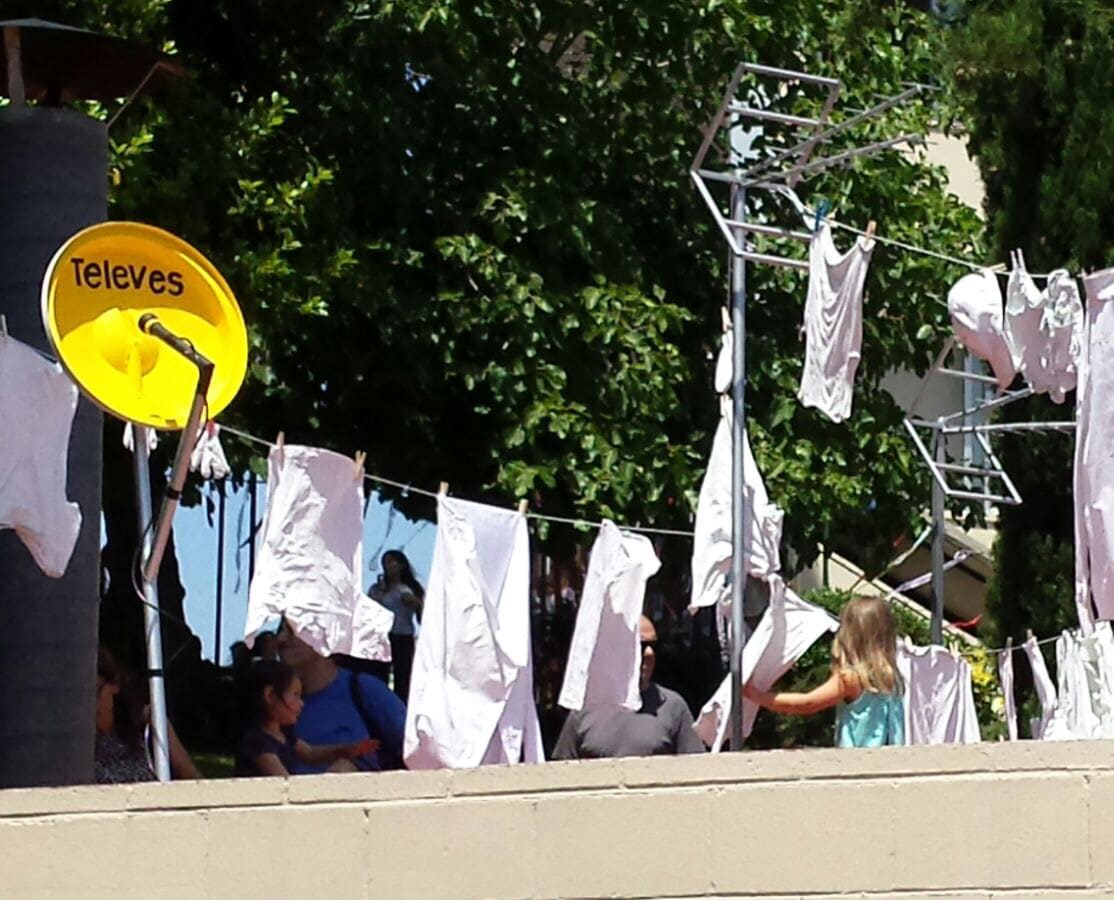 According to the author of this image, in a British school party, the participants recreated the roofs of modern towns. The students built their own versions of the antennas inspired on Televes models. Still more evidence that Televes antennas are present on roofs all over the world, even on imaginary ones!

Optical LNB and DTT in a single fibre

We are sometimes faced with the need to create a fibre network with the signal coming from an optical LNB mixed with the terrestrial signal. If the generation of an optical television signal requires an optimal C/N (usual requirement for applications handling analogue channels or with a high load of DTT content), the optical transmitter must ensure a perfect conversion.

Televes provides a system consisting of an optical transmitter in 1550nm, equipped with WDM for the mixing of the optical LNB signal in 1310nm (Ref. 237301).

Another device splits the signal and recovers the terrestrial signal on reception (Ref. 237311). 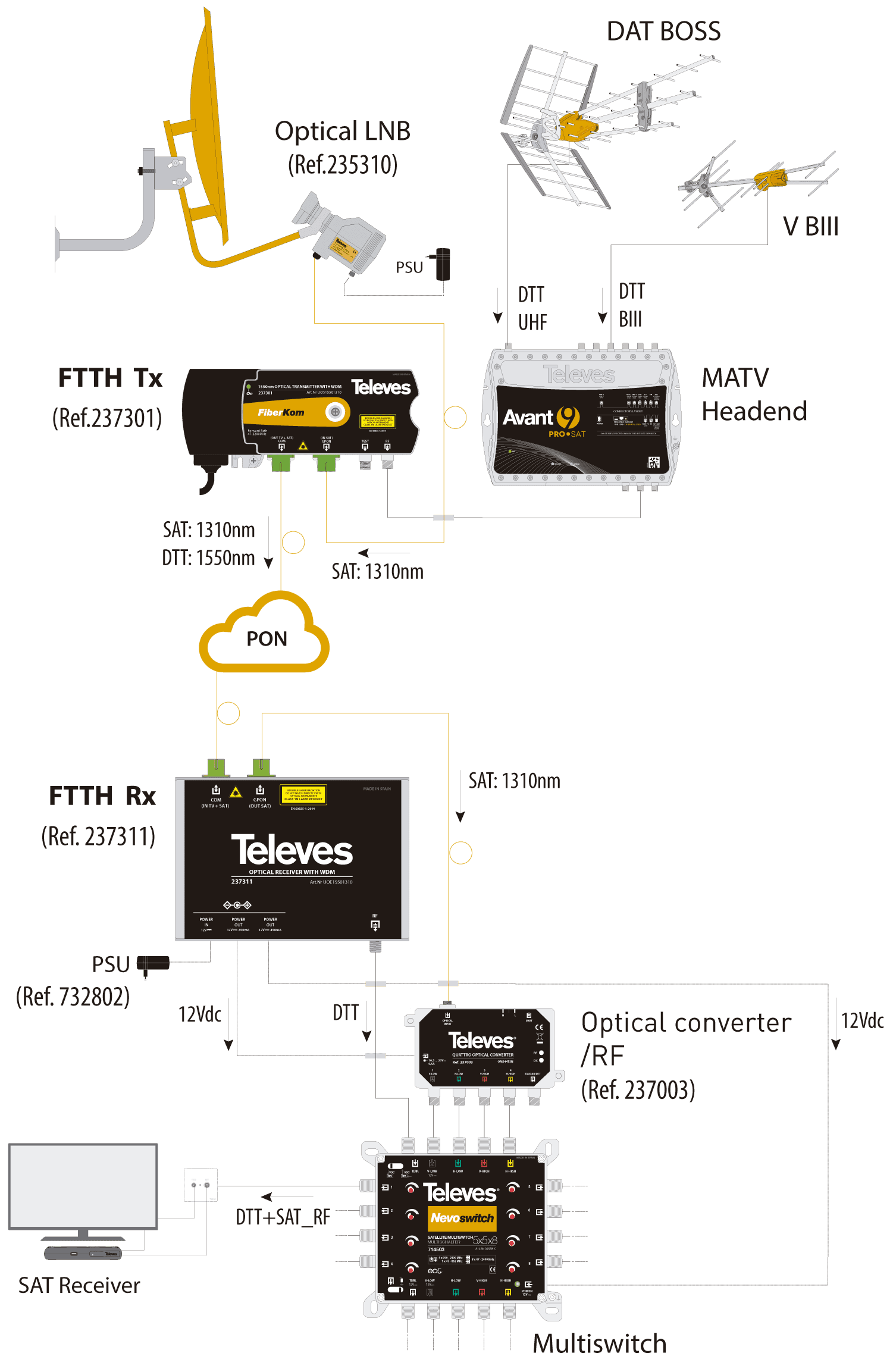 Both original analogue headends in the headquarters were replaced by two new digital modules. The new racks were equipped with encoders for the respective signal sources to be integrated with the TVi contents. The T.0X encoders produce 24 SD-modulated internal programmes, and two HD programmes with an outstanding signal quality 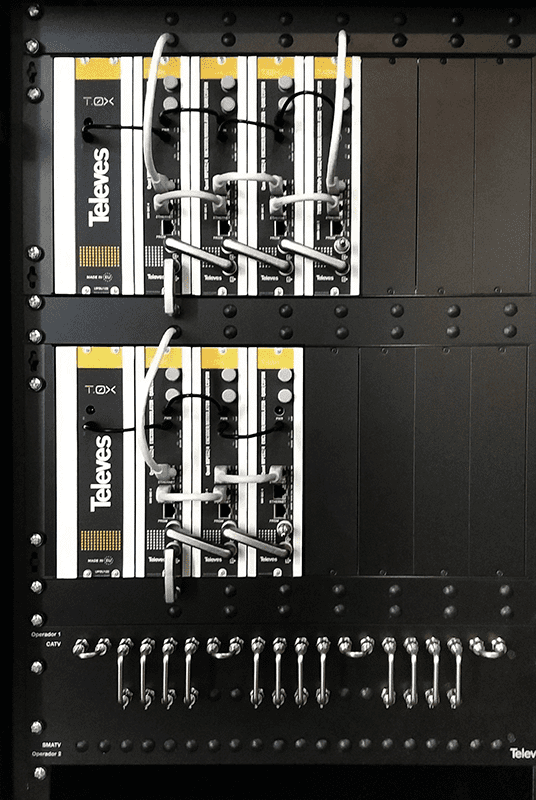 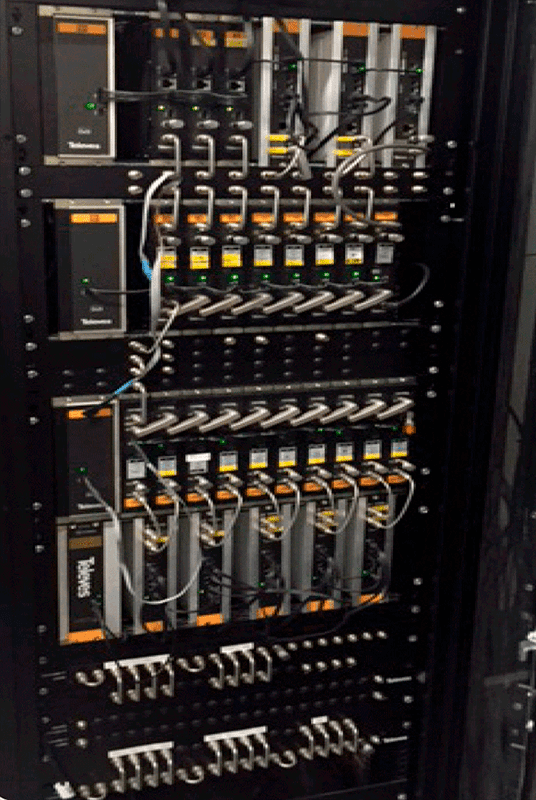 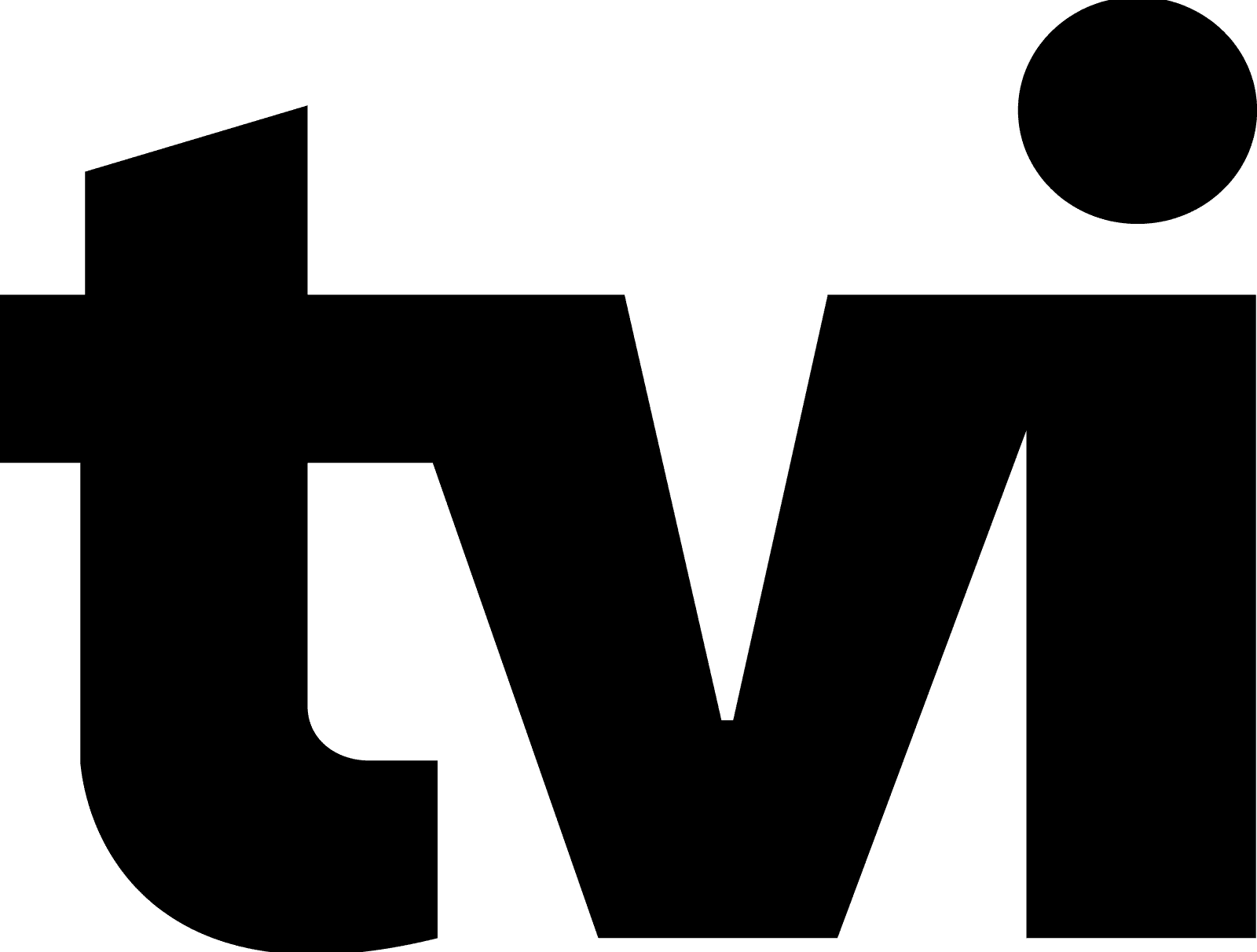 ...Televes has been manufacturing aluminium tubes for antennas ever since 1965?

The decision to import the first radio-frequency tube forming and welding machine may have been one of the very first visionary strategic decisions taken back in that year. It took over one year for the machine to be adapted to our stringent production environment, which forced us to devise an ingenious continuous supply circuit to avoid interruptions when changing materials in the production line.

Over the decades, other technologies have emerged for the manufacturing of aluminium tubes, but the upgrades performed by Televes engineers on the original radio-frequency machine still provides us with the best control and flexibility in the manufacturing of antenna tubes, since they are produced in a range of diameters both for cylindrical and square shapes.

The radio-frequency tube welding machine is still operating at full capacity, concealing the very essence of Televes. A technological vision from the early sixties that produced an always-innovative process through our industrial know-how that kept enhancing the original technique and art of the process

DVB evolution for the broadcasting of advanced services

DVB has revolutionised content broadcasting over the last twenty years, allowing the distribution of value-added services such as UHD. 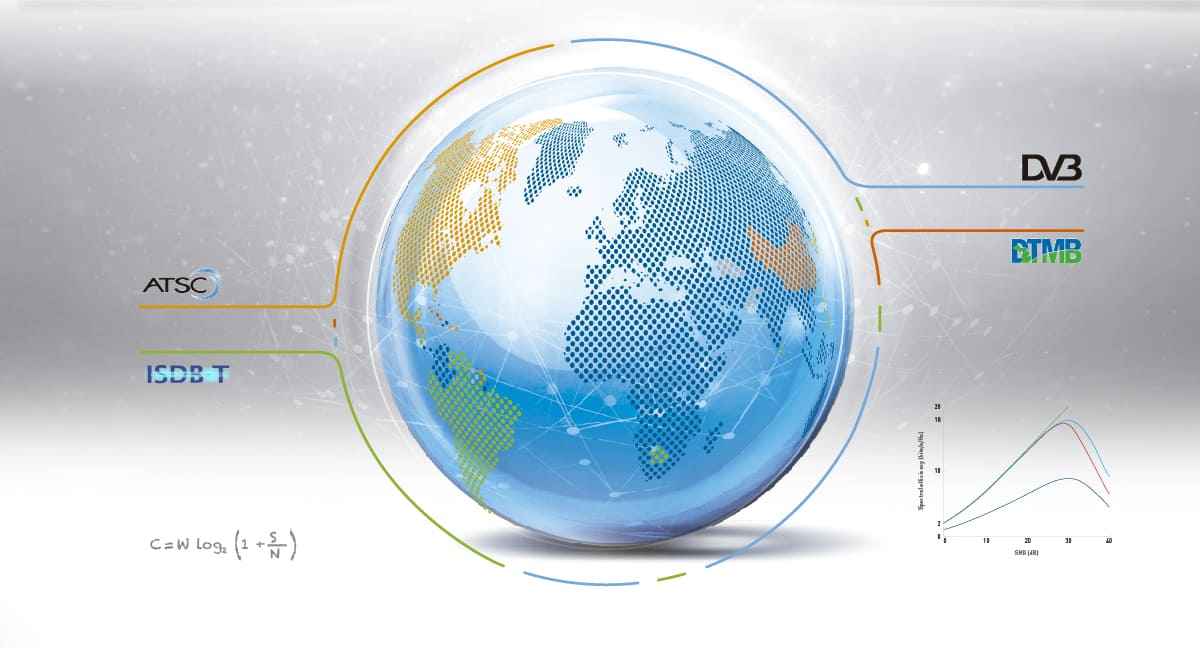 In 1991, broadcasters and equipment manufacturers combined efforts to provide a European Digital Terrestrial Television platform. The European Launching Group (ELG) was created, which expansion to other public and private groups laid the ground for the DVB project.

For legal and technological complexity reasons, the first digital services were broadcasted through satellite and cable: the so-called DVB-S and DVB-C, which standards were published in 1994. Service deployment to the final user was possible thanks to the MPEG2 audio/video compression algorithm, which allowed the use of manageable bit rates (15 Mbps at the very beginning!) with a good quality of compressed video. It was only in 1997 that DVB-T, the standard for digital terrestrial television, was published, thus completing the current set of standards.

These standards allowed the deployment of broadcasting services beyond Europe. Nowadays all the countries in the world —except for the US, China, Japan and Brazil— use some DVB broadcasting standard.

The standards had to evolve to a second generation when the need for a better usage of the broadcasting spectrum arose. DVB-S2, DVB-C2 and DVB-T2 gradually appeared, which brought the channel capacity close to the so-called “Shannon limit” (which establishes the maximum channel capacity for a given bandwidth and signal-to-noise ratio). This means there will not be a third generation of broadcasting standards. However, DVB-S2 has evolved to DVB-S2X, which substantially improves capacity for both very high and very low signal-to-noise ratios.

Some of the DVB-S2 modes, especially DVB-S2X, are used for satellite data distribution, while DVB-C2 is used for data distribution over cable and optical fibre networks. Finally, DVB-T2, which has already been widely deployed in Europe and Asia, has allowed UHD diffusion.

DVB has revolutionised content broadcasting over the last two decades. This short summary of its evolution left multiple topics out: content treatment and delivery, Conditional Access, IPTV, new MPEG4 and HEVC coding standards, 3DTV, LTE, Virtual Reality, and many others. They will be addressed in next issues